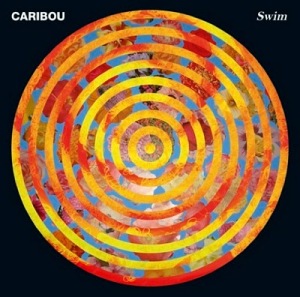 Writing a positive review for an electronica (or “indietronica”) album after slandering Rogue Wave’s repetitiveness makes me feel slightly guilty…but only slightly. The nine songs on Swim develop with a precision that keeps me nodding my head and pacing my elliptical machine strides to match. I didn’t buy this album for the lyrics (and a good thing too considering that several tracks have none); I wanted ethereal funk, and it delivers.

Dan Snaith (using the stage name Caribou after all-but being sued out of using Manitoba…by an American band) won the Polaris Prize¹ in 2008 for Andorra. His groovy electronic beats are not something I’d necessarily want to spend a night dancing to—the tracks would have to be remixed (even more than in the bonus track: Junior Boys Remix of “Odessa”). But Swim is a great album to have at the gym. With lots of trippy sounds drifting in and out of focus from ear to ear, it’s also a great catalyst for some zoned out day dreaming. “Sun” in particular reminds me of the feeling of lying face up underwater with the swooning waves above distorting the sun’s rays. “Odessa” is certainly the best track. It’s closer to what I wish more of the Gorillaz’ Plastic Beach had been.

I know it won’t float everyone’s proverbial boat, but if you like Air, Sigur Rós, and Boards of Canada, you should dive in to Caribou’s Swim. Sorry about the pun…

Buy from iTunes: The whole album. But if you just want a taste, go for “Odessa”, “Kaili”, and “Leave House”. On second thought…I had trouble singling those three out…just get the whole album.

If you liked this review, you might also be interested in my review of Jonsí (Sigur Rós’ frontman)’s album Go.

¹The Polaris Prize is a relatively new award for the best Canadian album of the year. It doesn’t look at record sales, but at the artistic merit of the album. The four winners have been:

2006 Final Fantasy (not the video games, but of Arcade Fire)

2007 Patrick Watson (the guy who sings “The Great Escape”)

I'm a published Canadian poet and fiction writer, posting haiku daily @writelightning on most social media sites. Please like and comment so that I know you're reading. It means a lot to me! END_OF_DOCUMENT_TOKEN_TO_BE_REPLACED
This entry was posted on Tuesday, April 27th, 2010 at 04:00 and tagged with caribou, dan snaith, electronica, music, review, swim, tyr's day and posted in Reviews. You can follow any responses to this entry through the RSS 2.0 feed.
« Sunday Morning Stranger in Your Bed: Tony Harrison
We are the Numb »