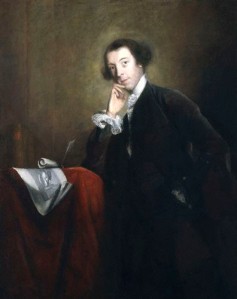 Unless you’re waking up in a rotting coffin, it’s safe to assume that you took your DeLorean back to the 18th century to bed down with life-long bachelor Horace Walpole for a night. It probably wasn’t satisfying for you: his family has a history of being first and he’s famous for fakery. At least he has a sweet pad.

Horace’s dad was Sir Robert Walpole, a Whig with so much influence on the British Cabinet that in hindsight he’s commonly referred to as the prime Prime Minister. After touring France and Italy with his buddy Thomas Gray (of the famous “Elegy”), Horace followed his dad into politics and became an MP at 24. This netted him the Twickenham estate which he renamed Strawberry Hill and renovated into a “gothick” villa. The “gloomth” of the place gave him a nightmare that he turned into the first Gothic novel ever: The Castle of Otranto. He wrote the thing in two months and published it as if he (as translator William Marshall, Gent.) had discovered an ancient manuscript written by a superstitious dark-age monk. It tricked most of his friends and members of the literary community and it became quite popular. With popularity comes the desire to be credited for it, so in the second edition he used his real name and claimed that it was a manifesto championing the imagination.

Otranto appears underdeveloped because we’ve been exposed to the 250 years of stock Gothic characters and scenes that followed it, but tip your hat to Walpole for how many of those stock characters and scenes he started. Phantom of the Opera’s candlelit subterranean journey is there; so is Manfred before Byron got his hands on him.

Walpole didn’t start the fake authorship routine, but I like to think that his success paved the way for The Princess Bride: S. Morgenstern’s Classic Tale of True Love and High Adventure: the Good Parts Version by William Goldman.

I'm a published Canadian poet and fiction writer, posting haiku daily @writelightning on most social media sites. Please like and comment so that I know you're reading. It means a lot to me! END_OF_DOCUMENT_TOKEN_TO_BE_REPLACED
This entry was posted on Sunday, July 18th, 2010 at 12:14 and tagged with castle of otranto, fake authorship, horace walpole, sir robert walpole, the princess bride, thomas gray and posted in ~Other. You can follow any responses to this entry through the RSS 2.0 feed.
« Mirror, Dreams
Tyr’s Day Music Review: Great Big Sea’s Safe Upon the Shore »

One response to “Sunday Morning Stranger in Your Bed: Horace Walpole”