I Will Fly to Thee: The Keats Museum

I’ve seen his apartment in Rome. I’ve seen his grave there too. And now I’ve seen where my sweet John Keats lived with his friend Charles Brown in Hampstead Heath. I love making these poetic pilgrimages to the places that represent the lives (and deaths) of my favourite wordsmiths. This trip was happier than the one in Rome. This is where Keats lived with his best friend and where he met Fanny Brawne. His life had little happiness, but hopefully Hampstead Heath provided some for him.

In 1818, Hampstead was far enough away from London to be considered an area of country homes. Even now it still has a small town charm that tries to separate itself from the fact that it lies right on the cusp of Zone 2 and 3 on the London Tube system. The heath itself is a massive park that gives at least a small impression of what the countryside would have looked like for Keats. Otherwise, there are houses everywhere, even creeping up in Brown’s backyard.

Or shops named after Keats. 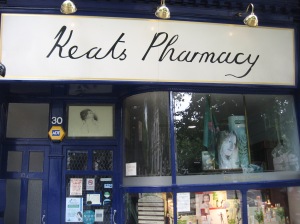 Before we (my friend Goran and I) were able to go into the house (at 1 p.m.), we walked around the heath where Keats heard his famous Nightingale – a park now full of bootcamp joggers, disobedient dogs, and mute swans.

We had lunch at the Freemasons Arms gastro-pub and then proceeded to the museum, which is not really much of a museum at all. The house’s interior has been designed to replicate what it looked like when Keats lived there, complete with some of Brown’s original furniture. Other equivalent time-accurate pieces round out the beds and chairs, and the paintings on the walls are of Keats and his circle of friends. The busts are arranged to portray the actual height of Keats, Brown, and Hunt, but I think that Keats’ is placed a little too high to represent his 5’1” (155cm) stature.

I was not allowed to take pictures within the house, which killed me when I saw the room that inspired Joseph Severn’s famous portrait of Keats (at the top of this entry). I wanted SO badly to recreate the pose on the chairs which had been placed in the exact position in the painting to tantalise me. Even the same portrait of Shakespeare was hanging on the wall! But I behaved myself and posed for the photo outside later. 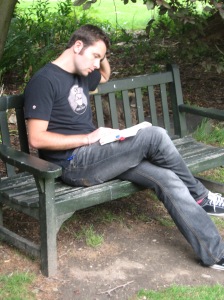 But that was after the confrontation at the front desk on my way out. While I was stocking up on souvenirs from the gift shop an English chap started berating the front desk clerk for the abysmally low quality of the “so-called” museum. I had not given much thought to what was lacking because I was just enjoying the house for what it was: a chance to walk the same halls that my beloved poet once graced. But the man’s point was in relation to a previous visit of his years early when the house also contained a library of Keats’ own books, including his volume of Spencer. That’s pretty awesome, and I can understand how moving it would be to see the actual texts that Keats held and read.

So where are these books now? They are in the London Metropolitan Library where scholars can use them. This is fine ground for a debate of public access and scholarly use that Goran, who knew the location, was not interested in getting into at the time. Because both of us already have a reasonably extensive knowledge of Keats’ life and works, we were not concerned with the lack of descriptions available about such things. There were simply laminated selections from letters and poems in each room that I had already read before, but I suppose the man had a point: that if someone was not familiar with Keats, there was little for them to learn about the poet except from books in the gift shop.

But I still had an excellent time. I don’t think many people make the 20 minute Tube-ride “trek” to Hampstead to see Keats’ house unless they already have some sort of appreciation for him. Most visitors to London stick to the main sites.

I would love to see his books (and did see manuscript copies of some of his letters in Rome), but as an amateur scholar of the man I can’t really oppose the books being kept in a library.

I remember how much I loved seeing the Book of Kells in person in Dublin, but there’s a replica in Halifax for students to use. I’d hate for Keats’ books to be mistreated—they were the only objects he mentions in his brief will—so I just want them to be where they will be kept safe and sound. 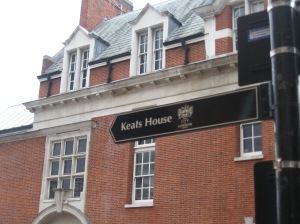 Take the Northern line to Hampstead. Walk down Hampstead High Street for a while. Turn left on Downshire Hill. Turn right at the church on Keats Grove and the house is on the right. Or stay on Downshire to go right to the heath.

The entrance fee is 5 pounds and is good for a whole year! The student rate is 3.

I'm a published Canadian poet and fiction writer, posting haiku daily @writelightning on most social media sites. Please like and comment so that I know you're reading. It means a lot to me! END_OF_DOCUMENT_TOKEN_TO_BE_REPLACED
This entry was posted on Tuesday, June 21st, 2011 at 10:18 and tagged with charles brown, hampstead heath, keats museum, london, nightingale and posted in ~Other. You can follow any responses to this entry through the RSS 2.0 feed.
« Stonehenge
Nay, an this be hell, I’ll willingly be damn’d here: Doctor Faustus at The Globe Theatre »