A Short Adventure in Newcastle-upon-Tyne, in which James is a Good Friend 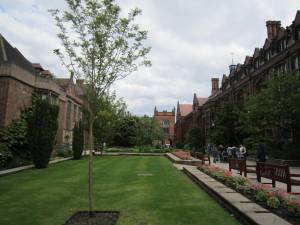 In Newcastle for a LitPop conference about which I will say little for reasons of intellectual copyright, except to say that I had a great time. Everyone was friendly and used words like “whilst.” One of the highlights was Dr. Sheila Whiteley talking about Morrissey. “Here. Something pretty for you to look at while I talk”:

And some of the others discussed (try to guess who they before you check their names in the rollover text):

Newcastle also intrigued me because of rumours I had heard about the appearance of the women there. Newcastle is famous around the UK for (as one friend described them) “women who walk around naked in any temperature.” Others told me things that would not be gentlemanly of me to share.

And Lo. One of the first people I saw when my bus rolled into town at 10 p.m. (on a weekday) was a woman wearing heels and what appeared to be parachute pants and a bra.

I did not take pictures of anyone because that would be creepy, so here are a few images from Google that will give you an idea of what I was seeing: 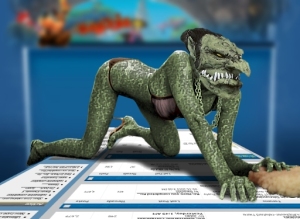 I went out to find a dance club and walked past the Central Station until I could follow the sound of bass beats erupting from a “Tropical Hawaiian” club. Not much to do or see. A lot of aggressive men drinking aggressively and a lot of women huddled around tables doing shots. No one dancing. I left and followed the crowd towards a place with a queue: seemed like a good sign of a popular party. But too popular for me. It was a private event and most of the people lining up had no chance of getting in. I tried a few more places, but there was not much going on other than the same aggro and strange outfits. So I gave up. And then I saw it.

For those of you who read my Wanderlust Ireland blog last year, you’ll know what a glorious find this was for me, and I do apologise for this uncharacteristically personal and dickish story. But I have to tell it. For Brice.

Brice backpacked with me around Ireland last year and he shares my love of curry cheese chips as an after-drinking meal. In fact, he might even covet them more than I do. In any case, when I saw the chipper in Newcastle, my excitement for actually eating the chips was only slightly greater than my anticipation for writing this and making Brice insanely envious. Because that’s what friends are for.

However, just because one finds a chipper does not mean that they have curry cheese chips. We have poutine in Canada, but it’s just not the same. Oh. But wait… what’s that I see on the menu… 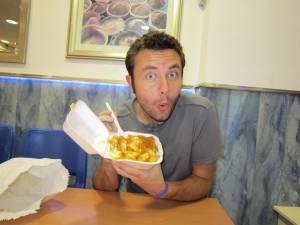 I think that grin says it all.

And that was the highlight of Newcastle.

I'm a published Canadian poet and fiction writer, posting haiku daily @writelightning on most social media sites. Please like and comment so that I know you're reading. It means a lot to me! END_OF_DOCUMENT_TOKEN_TO_BE_REPLACED
This entry was posted on Friday, June 24th, 2011 at 18:07 and tagged with bros, chipper, England, Newcastle, travel, UK and posted in ~Other. You can follow any responses to this entry through the RSS 2.0 feed.
« Nay, an this be hell, I’ll willingly be damn’d here: Doctor Faustus at The Globe Theatre
Surfacing »

One response to “A Short Adventure in Newcastle-upon-Tyne, in which James is a Good Friend”