Get your lucky set

Note: this post is going to be EXTRA nerdy, so put on your Cloaking Robe of Elvenkind and let’s get this adventure going!

I’m here to tell you about Haiku Warrior: a tabletop RPG (role-playing game) card game for 1-4 players. It’s a Kickstarter campaign on now. For $20, you get the game!

I’ve been playing Dungeons & Dragons since I was 12 and on many occasions I have gamed with only one other friend (with one of us at the Dungeon Master and one of us as the lone hero). It’s worked very well, but I don’t imagine it’s for everyone.

That’s where Haiku Warrior comes in!

The cards act as the DM (the story-teller of the game), so (like Talisman, if you’ve played it or seen it in the background of Big Bang Theory) you can play the game with two players (or even alone, if you want!).

If you’ve played D&D or any RPG before, you’re probably going to enjoy this game made by the creator of Drinking Quest, which is an RPG / drinking game in one. 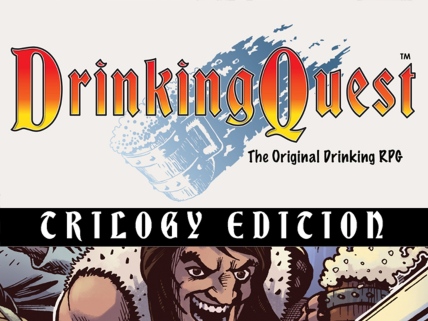 If you’ve never played an RPG before, this is a pretty great intro into a fabulous world of being a hero in a sword and sorcery world.

I’m excited about the game for two reasons:

2) It’s a game where every card is a haiku AND I am a stretch goal on the Kickstarter page! This means that if the game raises enough money, I will contribute a card to a bonus level of the game.

So if you like the idea of being a fantasy adventurer conquering monsters and completing quests – told exclusively in haiku – then check out the Kickstarter page! Maybe we can play it together at the Stormcrow Tavern in Vancouver.

I'm a published Canadian poet and fiction writer, posting haiku daily @writelightning on most social media sites. Please like and comment so that I know you're reading. It means a lot to me! END_OF_DOCUMENT_TOKEN_TO_BE_REPLACED
This entry was posted on Thursday, April 16th, 2015 at 01:36 and tagged with board game, card game, haiku, James J. Stevenson, kickstarter, poetry, rpg, tabletop and posted in ~Other. You can follow any responses to this entry through the RSS 2.0 feed.
« Fan Expo Vancouver
Northwest Fan Fest »